Lately I find myself in conversations where I long to explain more about what life is like for us in Niger. It’s that innate need to be understood, or to be known. Oh sure, we aren’t necessarily going to always be understood or known – except by God, of course! But I think we all crave it from our fellow humans.

It happens randomly. For example, I was at my boys’ track meet recently, and someone’s sandwich fell on the ground. We laughed as the man dusted off the dirt, and joked about the 3-second rule. 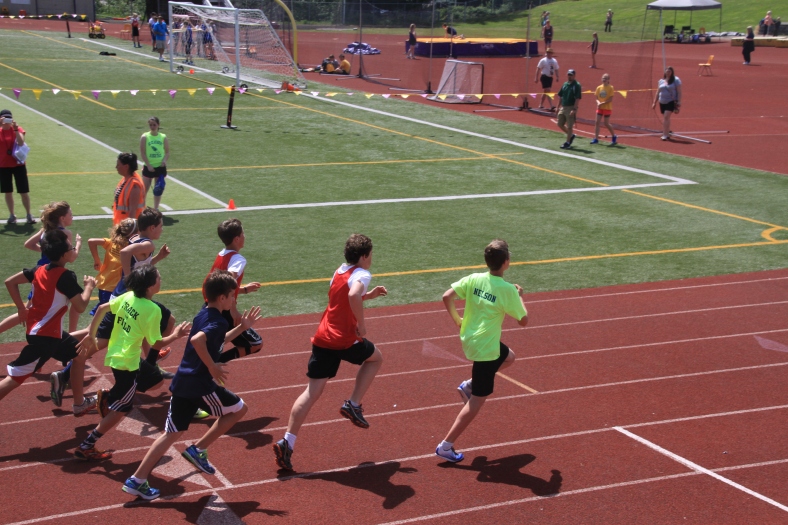 Nathaniel (second from the right, in red) reaches for the front of the pack in the 800 meter race. (Meanwhile, I was at the long jump pit stumbling through conversations!)

I’m not even sure if he ate it, but I blurted out (awkwardly) “I can think of a country where you wouldn’t want to do that!” Not surprisingly, an equally awkward silence followed.

“Oh,” I blundered, “where we lived in Niger the ground everywhere was used as, you know, a bathroom.” (Polite laughter.) What in the world?

I went on to describe the scene in Niger, where people of all ages use the ditches and roads for their “relief”. Along with the cattle, goats, sheep and chickens. It was interesting stuff!

But really, did it need to be shared? I mean, it is kind of gross. And a bit “out in left field”.

But the man dusting the dirt off his sandwich brought it to my mind and I didn’t want to have that memory alone. I just wanted to share it! (*sigh*) Even if it isn’t exactly opportune.

Another one of those cross-cultural things about my life now, I suppose. Maybe someday I’ll have some very authoritative conclusions about this missionary life? For now, though, I’ll simply keep stumbling forward and learn to embrace the nuance and humility of living between worlds.

One more “special share” (like I said, I can’t help it!). Check out this video of Niger a friend of mine found on Vimeo – it is really such an accurate view of everyday life in Niger. Enjoy!

2 thoughts on “A Glimpse”

Follow Gray Family: Sojourn in the Desert on WordPress.com

Life, Food, and Not Being Afraid To Make A Mess.

daily snapshots and soundbytes in anticipation of the joy to come

Following God's leading into the Sahel

Cara Meredith
Is it hot in here...

The Kubackis in Angola
Truth & Love: Life in the Sahel Dorm

Gray Family: Sojourn in the Desert

"The Lord will guide you always, He will satisfy your needs in a sun-scorched land..." Isaiah 58:11